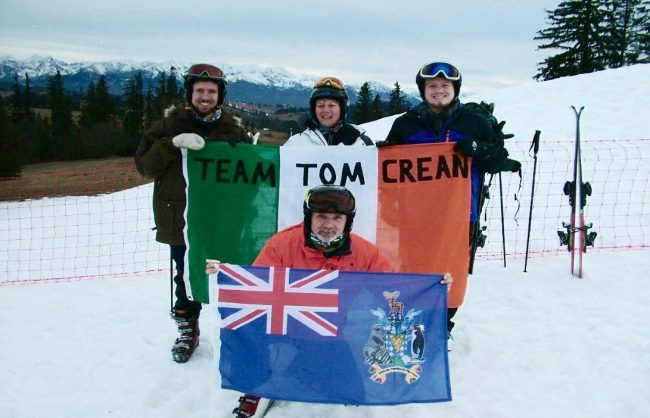 Tom Crean is an Irish hero. In 1916, he was part of Ernest Shackleton’s Endurance Expedition to the Antarctic and one of the greatest adventure stories ever told. When the Endurance became trapped in pack ice and sank the crew piled into three small lifeboats and sailed to the uninhabited Elephant Island.

But the rescue was 1,500 kilometers away through some of the world’s roughest oceans and Crean, along with Shackleton and a small crew, somehow navigated a flimsy wooden boat through mountainous waves and freezing temperatures to the remote island of South Georgia. Exhausted and starving the men then trekked 48km across sheer peaks and deep crevasses before raising the alarm and winning their rescue. One hundred years later their feat is still celebrated as one of the great survival stories.

Now, Tom’s granddaughter Aileen, her two sons, Morgan and Cian and her partner Bill will attempt to follow the men’s treacherous journey across South Georgia. Aileen Crean O’Brien grew up listening to the stories of her famous grandfather, Tom. He died before she was born, but her home was a shrine to her grandad’s expeditions, including his sailor’s ‘diddy box’ which she found as a child in her mother’s bedroom. It contained his Albert and polar medals and Aileen was determined that one day she’d follow in his footsteps. Aileen, Bill, Morgan and Cian have been training for the expedition for the last two years by dragging tires up and down the Kerry hills.

To keep to the same route as Tom Crean on South Georgia they will have to drag heavy sleds called pulks around deep cracks in the ice and across glaciers. They will encounter biting winds, sheer cliffs and some of the roughest seas in the world.

RTE Documentary On One follows the family from the Tom Crean Fish & Wine Restaurant in Kenmare, County Kerry to the Crean Glacier, Crean Lake and Shackleton Waterfall on South Georgia.

Can Aileen honour Tom’s memory and complete the dangerous traverse of this isolated island at the bottom of the world?

As part of the RTE Documentary on One series, ‘In Tom Crean’s Footsteps’ was aired on August 5th 2017.

You can listen back here.

Thanks to Aidan Dooley for the use of material from ‘Tom Crean: Antarctic Explorer’ – www.tomcreanshow.com

Thanks to Aileen and family for letting me tell their story, Shona McCarthy for telling me about Tom Crean’s granddaughter in Kenmare and Rob Mulhern from Doc on One for Production Supervision.