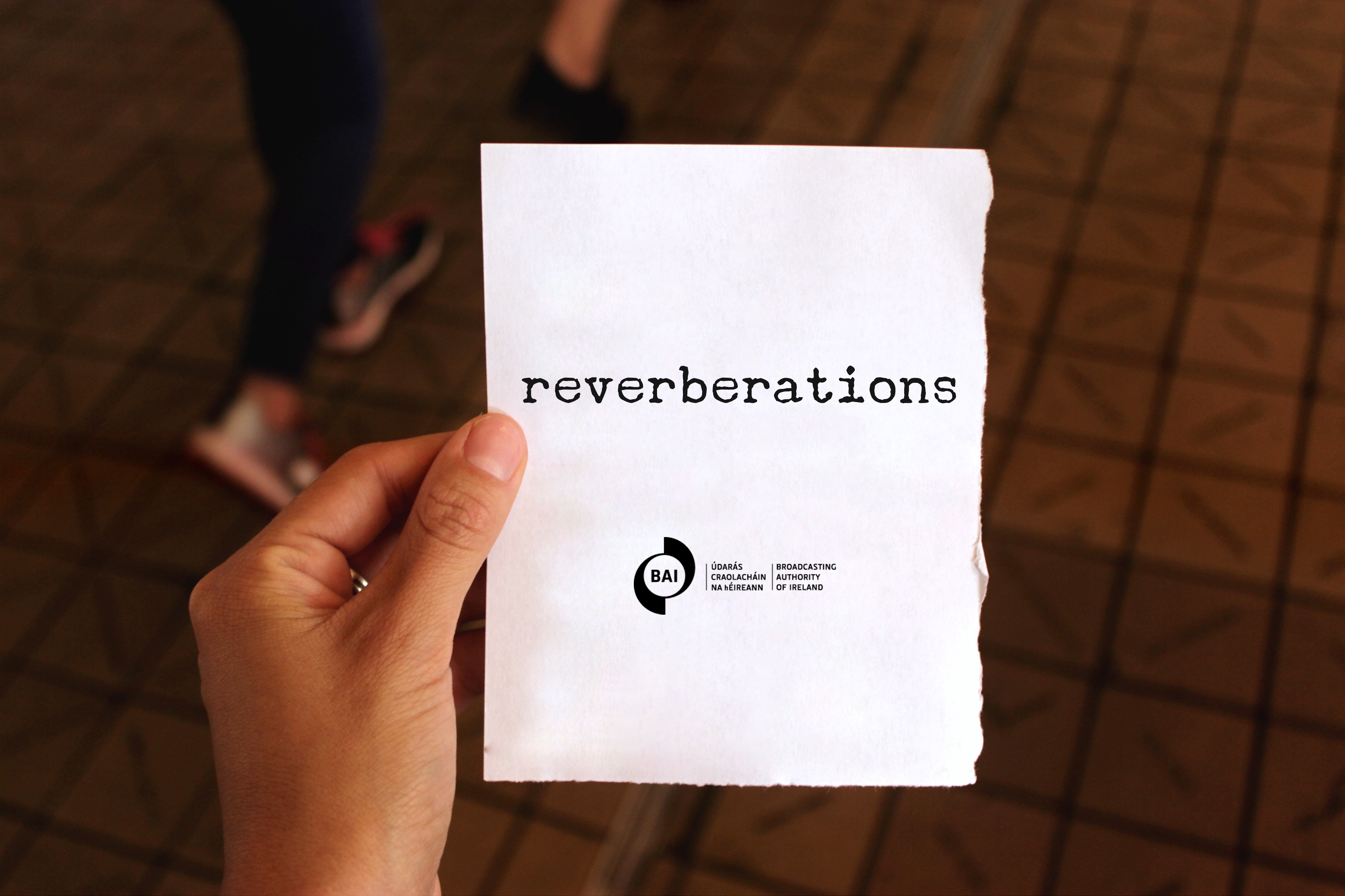 Six of Ireland’s foremost female poets and spoken word artists speak about their work and perform a poem inspired by a particular soundscape in a unique location.

Please listen on headphones if you can. Listen to Series 1 here.

Starting Thursday November 7th at 8pm on RTE Radio 1 Extra. Listen live on TuneIn or   http://www.liveradio.ie/stations/rte-radio-1-extra and on the Irish Radio Player app.

You can find the podcasts below after broadcast or in your chosen podcast app, search for Reverberations.

FeliSpeaks (aka Felicia Olusanya) is a young Nigerian-Irish spoken word poet, performance artist and writer. She was recently nominated as ‘Best Performer’ by Dublin Fringe Festival in 2018, for her performance in ‘BOYCHILD’. Felicia has also been honoured with an award by the (APNI) African Professional Network of Ireland for her unique contribution to the art scene in Dublin City. Felispeaks has her mind set on changing poetry as performed and received in Ireland.

FeliSpeaks performs the poem ‘Rain’, written to challenge the people, the place and product of the countries we live in. What have we planted? Are we comfortable with it’s growth?

It was inspired by a rainstorm while taking shelter under a bus shelter in New York. She also touches on finding her voice while taking over the school intercom, the differences between performing poetry and theatre and making a living as a poet in Ireland.

Episode 1 was broadcast on RTE Radio 1 Extra on Thursday November 7th at 8pm.

Nuala Leonard’s work, ranging from the political and the personal to the purely entertaining has been described as witty, moving, powerful and tremendous. Originally from Mayo and now living in Meath, Nuala was the 2017-2018 All Ireland Slam Champion and represented Ireland at the European Slam Championships in Budapest last December. She has headlined a number of gigs across the country and hopes to have a book published in the coming year.

Nuala performs her poem ‘Ash Music’; written about standing beneath an ash tree on the side of the road listening to and looking at what happens in that space. There are opposing elements in the poem – nature and the modern world, the past and the present, different human conditions.

She also talks about how she had difficulties with dyslexia in school, but went onto performing spoken word. She discusses keeping people’s attention on stage and her writing process.

Episode 2 was broadcast on RTE Radio 1 Extra on Thursday November 14th at 6pm.

Music: I Don’t See The Branches, I See The Leaves by Chris Zabriskie.

Melissa Ridge is a spoken word artist from Maynooth. For the last 5 years she has performed at events and festivals in Ireland and in the UK. At 23 she is fast becoming an influential figure in the Irish spoken word scene. She has been featured in the Sunday Business Post, Poetry Ireland’s ‘Trumpet’ and on RTÉ Arena expressing her views on the future of spoken word in Ireland. She is the executive director of spoken word agency Boundless & Bare and editor at BND Magazine.

Melissa performs ‘Dublin Soundscape’, a poem about a city that feels like a distant cousin despite her living there.  She touches on the history and sounds of Dublin, as well as the change makers in the city.

She shares how she controls her nerves every time before performing, setting up the Boundless and Bare spoken word agency and her goal to develop her own personal style.

Episode 3 was broadcast on RTE Radio 1 Extra on Thursday November 21st at 8pm.

Amy Barry is a highly Commended SiarScéal Hanna Greally International Literary award winner for the second time this year. A poet and short story writer, she has featured on radio and television in Australia, Canada, Italy and Ireland. Her poems have been translated into Italian, Irish, Spanish, Azerbaijani, Greek, Persian, Malay, Romanian, Turkish and German.  Her work has been published globally, including Paris, New York, Milan, Belfast, Nepal and Hawaii. She often reads at festivals and literary events both in Ireland and abroad.

Amy performs two short poems; ‘Kaleidoscope’ – inspired by her garden with fresh breeze, birdsong, a bubbling fountain and her cat Pablo. The second poem is ‘Passport’ – a meditation on nature, grief and travel.

Amy discusses how she has changed from being a busy career woman to being a poet, travelling to perform in Morocco, Turkey and Italy and how she attempts to motivate secondary school students to write and appreciate poetry.

Episode 4 was broadcast on RTE Radio 1 Extra on Thursday November 28th at 8pm.

Elaine Feeney was born in the West of Ireland and lives in Athenry. She published her first chapbook, Indiscipline in 2007, and has since published three collections of poetry, Where’s Katie? (2010), The Radio Was Gospel (2014) and Rise (2017) with Salmon Publishing. Her debut novel, As You Were, will be published by Harvill Secker/ VINTAGE in March 2020.

Elaine’s poem ‘Girls in the Woods’ is inspired by time spent in Monivea Woods in Co. Galway. At the entrance to the woods is a Mausoleum with the bodies of Kathleen ffrench and her father, Robert Percy ffrench interred inside, and Kathleen’s cousin Rosamund, buried outside the building. She imagines her life being very different to that of the ffrench’s.

Elaine talks about how Patrick Kavanagh and Rita Ann Higgins’ poems inspired her.  She describes how poems can come to her while walking in the woods and the differences between writing poetry and fiction.

Episode 5 was broadcast on RTE Radio 1 Extra on Thursday December 5th at 8pm.

Sian Ní Mhuirí is an Irish / New Zealand writer, theatre-maker and facilitator. Previous writing credits include award-winning children’s play Aunty Ben (UK and Ireland Tours, 2014 & 2015), 16 & Rising (Dublin, Galway, Laois 2016) and Mysteries of the Deep (Dublin 2016). Sian was recently awarded the RAK Mason Fellowship 2017 by New Zealand Pacific Studios, and the Draíocht Residency 2019 at the Centre Culturel Irlandais, Paris. Her next play for young people – The Lonsdale Project – is about chemistry, crystals, and war, and will be premiering in Riverbank Arts Centre in March 2020 before touring nationally.

Sian performs her poem ‘Gay Spar’. It is about the street corners of Dublin, and who owns them. It’s about chicken fillet rolls, cheesy tunes, and cheese and onion crisps at 3am. It’s about stepping out of the closet, and stepping into a world which subtly, but insistently, does not belong to you.  It’s about amazing feeling of being in on a joke, when you so often feel left out. And most of all it’s about how a bunch of queers decided to claim a cafe-cum-newsagent as an unlikely gay landmark, and all that says about Dublin in 2019.

Episode 6 was broadcast on RTE Radio 1 Extra on Thursday December 12th at 8pm.